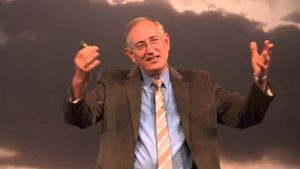 Recently a good friend asked us to watch a recent video by Walter Veith on the subject of character perfection and perfect obedience. For a long time we’ve known that Walter Veith doesn’t believe in either of those. I spent quite a bit of time listening to this video. The following is what I wrote back to our friend who asked us to listen to the video because after he listened to it he came to the conclusion that Walter Veith has changed his beliefs on character perfection and perfect obedience.

We hope that you will find this response helpful as you try to determine if he truly is on the right side or not.

Letter to Our Friend ~

Now I’ll try to give you some reasons why I believe he hasn’t changed his beliefs. (And probably I should make it clear that the beliefs I’m talking about are his teaching that we can never have the perfect character of Christ and that we can never perfectly keep the law as Christ did—which are both part of his “controversy” with those of Last Generation Theology.)

First, he starts out by saying (at about the 26 minute mark): “There are 2 camps. One camp says that we are incapable of keeping the law. That is the one group that we have in the world. The other group goes to the other extreme and says: Yes, we will be able to keep the law perfectly, just as Jesus kept the law perfectly.” He says “the two parties never meet.” And then says: “But somewhere in the middle there is the concept: Yes, we must overcome sin. And we must strive in our sphere for perfection.”

Those words, “the other extreme,” combined with those words, “somewhere in the middle,” seem to clearly say that both camps are wrong, which means he doesn’t believe that “we will be able to keep the law perfectly.” (That’s pretty much exactly what he taught in that earlier video.)

Also, briefly: Many times in this video he uses the phrases (taken from Ellen White)—“perfect in His sphere” & “perfect in our sphere.” In the earlier video he also uses those two phrases. When he uses them in the earlier video what he’s saying is, “His sphere” is absolute perfection, while “our sphere” is not. I believe that’s a serious misapplying of what Ellen White means when she uses those two terms. She almost always uses those two terms in connection with Matthew 5:48, where Jesus tells us, “Be ye therefore perfect, even as your Father which is in heaven is perfect.” (If that’s not absolute perfection I don’t know what is.) When she says, “His sphere” & “our sphere” she’s referring to the “universe” as His sphere, and our “little circle” of influence as our sphere (see Mount of Blessing 77, 78), she’s not saying that His sphere is perfection while our sphere is something less than perfection.

“All through the Scriptures He has given us assurances that through his grace WE MAY ATTAIN THE SAME PERFECTION OF CHARACTER THAT HE ATTAINED.” {Signs of the Times 6/10/1903}

So, even though we “can never attain His exalted character,” Ellen White is clear: “we may attain the same perfection of character that He attained.”

To even further try to convince you, I have what I think might be an even better quote:

“At every stage of our development our life may be perfect; yet if God’s purpose for us is fulfilled, there will be continual advancement. Sanctification is the work of a lifetime.” {Christ’s Object Lessons 65}

The Controversy Between Walter and Last Generation Theology

Next, at about the 49 minute mark he’s asked a question about Last Generation Theology (LGT), and he begins his answer by saying, “Last Generation Theology is an incredibly controversial issue.” (That word “incredibly” is an extremely strong word.) He then says, “I’m going to tell it like I see it, and there will be many that differ with me.” (Clearly, he doesn’t agree with LGT. And surely, in my mind at least, the fact the he himself openly admits that, “many will differ with me,” raises some red flags.)

Let me stop here and say—as I think you know—I’ve never been a big follower of LGT, but I certainly agree with them that God’s last day people are going to perfect Christlike characters. Most every conservative Adventist is familiar with this next quote—“WHEN THE CHARACTER OF CHRIST SHALL BE PERFECTLY REPRODUCED IN HIS PEOPLE, then He will come to claim them as His own.” (Christ’s Object Lessons 69) Clearly, that’s not what Walter taught in that earlier video:

“This idea that we will stand and be perfect while we have a fallen nature, and that we will have the perfect character of Jesus, is not Biblical, neither is it in the Spirit of Prophecy.” {Walter in that earlier video}

“We will never attain unto His perfect character.” {Walter in that earlier video}

(On that first quote: #1—When someone knows they’re influencing thousands of people they should really try to make sure that when they tell them something isn’t in the Spirit of Prophecy they’re right. And #2—In telling them that, Walter shows one of two things: either a surprising ignorance of how many times Ellen White says that we can perfect a Christlike character, or a blatant dishonesty.)

Still on LGT: Walter then says: “Jesus Christ is the same yesterday, today, and forever” (which of course is a Bible verse and a Bible truth). He then says, “Has the plan of salvation ever changed?” And his answer is, “No.” Obviously, there’s truth in that, but I believe he’s grossly misapplying that. The issue/controversy isn’t over how those of the past were saved as compared to how we today are saved. The issue/controversy is: Does God expect more from His people today, who have more light, than He expected of those of past ages, who didn’t have so much light? Walter then lists a number of great men and asks the young lady: “when Martin Luther, or Adam, or Peter come out of the grave, how perfect are they?” “Will they have any sin?” (To me those seem like senseless questions. EVERYONE is going to come up out of the grave perfect and sinless, but that has nothing to do with the issue/controversy.)

LGT teaches, and I agree: God expects more from His last day people. (David walked with God and was accepted of Him while having multiple wives. That could never be so today.) Ellen White is very clear that the 144,000 will have an experience that others have never had.

“And they sing “a new song” before the throne, a song which no man can learn save the hundred and forty and four thousand. It is the song of Moses and the Lamb—a song of deliverance. None but the hundred and forty-four thousand can learn that song; for it is the song of their experience—AN EXPERIENCE SUCH AS NO OTHER COMPANY HAVE EVER HAD.” {GC 649}

“The godly character of this prophet (Enoch) represents the state of holiness which must be attained by those who shall be “redeemed from the earth” (Revelation 14:3) at the time of Christ’s second advent.” {PP 88} (Clearly, this can’t be said of earlier generations.)

Walter’s bringing up the saints of the past and basically saying our experience will be no different from theirs isn’t in harmony with those two Ellen White quotes. (It also lowers the standard.)

Still on the subject of LGT: at about the 53:30 mark Walter says, “There are people that say we are going to be different because we stand before God without a mediator.” (That’s more proof that he doesn’t believe God’s last day people are going to have a different (higher) experience than those of earlier generations.) He then reads a quote (I don’t believe it’s from Ellen White) and gives an explanation that to me seems to totally avoid the real question. The real question being: Since “we are to stand before God without a mediator,” is it imperative that we no don’t commit sin then? (He doesn’t say one thing about the saints not committing sin at that time.)

One more thing. Around the 34 minute mark he makes the statement: “Nobody who sins willfully will get to heaven.” To me, adding that word “willfully” gives the impression that God’s last day people will still be sinning, just not willfully.

That’s all… I hope I’ve said something worth thinking about. Most of all: Stay close to the Spirit of Prophecy—“Those who believe that the Lord has spoken through sister White will be kept safe from the many delusions that will come in these last days” & “prove all things” (with the help of the Spirit of Prophecy).