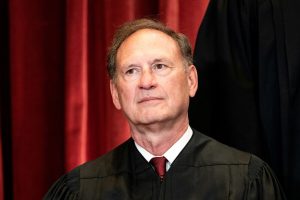 As I read Justice Alito’s leaked draft of the Supreme Courts decision on Abortion this week, I was greatly encouraged. If the LEFT is not able to intimidate them, the majority of the Supreme Court Justices will vote to undo Roe V. Wade, and the lives of MILLIONS of innocent Babies will be saved, thereby giving them an opportunity to come to know Jesus as their Savior.

It’s about time that the near 50 years of Infant Holocaust comes to an end! (at least in Pro-Life States ~ Pro-Death States will continue to make Abortion (Murder) legal.)  I wish that the Supreme Court would take it one step further and not allow the States to determine their own laws in regard to Abortion.  It should be classed as MURDER. PERIOD.

Abortion Is Worse Than Euthanasia ~

As far as I know, there are no other KINDS of MURDER that States are allowed to VOTE on and decide whether or not that KIND of MURDER is lawful in their State. I take that back!  Euthanasia.  There are 8 States where Assisted Suicide is legal: Oregon, Washington, Montana, Vermont, California, Colorado, Hawaii & New Jersey. As sad as it is that people will choose to commit suicide, it still does not compare to Abortion.  That Little Baby being aborted has NO CHOICE in the matter. But let’s not get side-tracked from the Abortion issue.

It is going to be very interesting to watch and see what the Seventh Day Adventist Church does when Abortion is over turned. For nearly 50 years, the SDA Church has been promoting and profiting by this basest of all sins ~ MURDER of the MOST INNOCENT amongst us.  Their 1992 Abortion Guidelines were so LOOSE.  (For a little history on the Seventh Day Adventist Church and Abortions, check out this link.)

James 2:10 says, “For whoever keeps the whole law and yet stumbles at just one point is guilty of breaking all of it.” Many Adventists have forgotten this verse.  They seem to think that as long as they keep the Sabbath, breaking the 6th Commandment is of little consequence.

In 2019, the Church came out with a new set of Abortion Guidelines…which at first glance appear to be Pro-Life.  What it really is though, is a  carefully crafted document that tries to sound Pro-Life when in fact it is NOT.  You must remember, over 50% of the SDA Church stands on the side of Abortion.  The leaders of the organization do not want to anger EITHER side, as that would hurt them financially. They have purposefully never brought the subject to vote at a General Conference Session, so that way they can say, “We have no official position on abortion.” What a cop out!

The LEFT In the Church Proves Our Point ~

But all you have to do is read the comments from those on the LEFT within the Church, and you can tell that this 2019  Abortion Guidelines isn’t Pro-Life, or they would be up in arms!  As you can see here ~ they are not up in arms.

The Biblical Research Institute did what the General Conference asked it to do and it did it well. This was to present Scripture’s understanding of human life in a way which would be pertinent to the issue of abortion [and presumably to other bioethical issues as well]. The GC did not ask the BRI to formulate the policies and protocols which SDA institutions would now follow. This point was repeatedly made in the Executive Committee’s discussion of the Statement before it was voted. This is a good thing because this would be going beyond the BRI’s mandate. It would also be going beyond what the General Conference can enforce.

Each institution can now determine how it will relate these biblical resources to its circumstances. This won’t be difficult because the wording of the 2019 Statement is less precise than the wording of the 1992 Statement. This leaves more rather than less room for institutional discretion.  David Larson is Professor of Religion at Loma Linda University Health.

Another thing that is shocking to me is that there are so many Seventh Day Adventists, who, because of their FEAR of the National Sunday Law being passed, and their MISPLACED FEAR of the Catholic role in this, they will see the overturning of Roe V. Wade as an APOCALYPTIC event, that will be sure to usher in the National Sunday Law….therefore, their FEARS will hold them back from rejoicing in this wonderful news! And instead, they will see this as a foreshadowing of terrible things to come!  If you think I’m exaggerating, listen to the conversation here between Conrad Vine and Timothy Perenich. (Start at 1:11 and goes to 1:17). It’s really mind blowing what is said.

Imagine that! being TERRIFIED of the Supreme Court overturning Roe V. Wade! What kind of impression do you think that will make on Conservative Sunday-keeping Protestants or Catholics????  I can assure you, Christians from other faiths would want NOTHING to do with so-called Christians who are promoting Sabbath-keeping but won’t stand up for LIFE and against Abortion.

For a documented time line of HOW & WHEN the Adventist Church became involved in the Abortion Industry.

Well worth the time it takes to read it.  Well, I hope you will rejoice with me that FINALLY, there is a BIG STEP in the right direction for the protecting of LIFE!