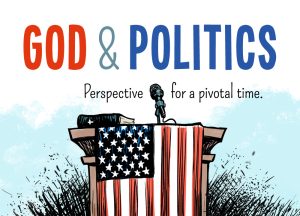 Such a timely article! How often today do we hear the cry, “You should’t be talking about that! You shouldn’t be writing about that, it’s POLITICAL.  Stay out of POLITICS!” That is what many were saying back in Ellen Whites day, when they were reading the Signs magazine and the article was against SLAVERY. And what did she say about those who had a problem with the article?

If our pens and voices are to be silent when principles of justice and righteousness in warnings or reproofs [are at stake] because some one or ones, believers or unbelievers, are so sensitive, bigoted and prejudiced, that their peculiar, political sentiments cannot be in any manner referred to, that class will have to be thoroughly converted to God—their sentiments reformed.

That is pretty strong language.  She calls people who were offended by the Anti-Slavery article, “sensitive, bigoted and prejudiced” and goes on to say that they need “to be thoroughly converted to God” and have “their sentiments REFORMED.”

I believe she would say the same thing today, when it comes to such topics as Abortion, Homosexuality, Gender Confusion, etc.  She even went so far as to compare what these people were doing, with cutting out verses of the Bible that didn’t harmonize with their thinking. (See the last paragraph of the article below.)

The Pioneers Were Not Politically Correct

The Pioneers of the SDA Church were not “Politically Correct” in their day, and neither should we be, today. We should speak the TRUTH in love, and let the chips fall where they fall.

Just because moral issues fall into the Political Arena, doesn’t mean they are off limits for Christians to talk & write about.  We should all use our influence as far as possible, to steer the minds of people back to be in harmony with the Bible.

A Timely Article From the Pen of Ellen White ~

Dear Brethren and Sisters at Woodland:

I received a letter yesterday from one of your number, Brother Grayson, whom I love and respect as a child of God, nevertheless I was pained by the contents of the letter. 3LtMs, Lt 36, 1880, par. 1

I called for the Signs and carefully read Elder Waggoner’s article, and reread it. I came to the conclusion if any one of Southern or Northern sentiments could take exceptions to that article, anything they might read in the Review or the Signs would do them no good. If our pens and voices are to be silent when principles of justice and righteousness in warnings or reproofs [are at stake] because some one or ones, believers or unbelievers, are so sensitive, bigoted and prejudiced, that their peculiar, political sentiments cannot be in any manner referred to, that class will have to be thoroughly converted to God—their sentiments reformed. 3LtMs, Lt 36, 1880, par. 2

We feel now called upon to speak decidedly. We shall speak and write guardedly, but shall not withhold such matters as are expressed in the Signs of the Times to which you make reference. 3LtMs, Lt 36, 1880, par. 3

I have been shown that there were feelings and views with many who profess the faith at Woodland which were not in accordance with the Word of God. The political sentiments and feelings were very strong with some, and this is the reason why they do not grow in grace and the knowledge of the truth. They are offended at any reference to their peculiar sentiments. There has no word of complaint come from any place but Woodland. Not a word, not a feeling has been expressed from Texas or from any of the Southern states. It cannot be that our papers can be printed with no word or reference to anything which will differ from the political sentiments of some. These political sentiments with any one or more believers or unbelievers, if irritated or stirred by such an article as you refer to, I fear will be of no use to us; the less we have of them, the better off we shall be as a people. Every species of slavery is not in accordance with the Word of God. The evils are too great to be enumerated. And if men and women have embraced the solemn truth for these last days that sanctifies the soul, the old political sentiments that sustain the old system of slavery will be, before they are translated, purged from them. 3LtMs, Lt 36, 1880, par. 4

Brother Saunders will change his branch of labor ere long and cannot conscientiously give the sanction to sentiments coming from the office of which he has the control. God’s Spirit has been grieved by the feelings cherished by some in the Woodland Church. What these souls need is conversion to God. The light shines so clearly now none need to walk in darkness. My testimonies have gone all through the Southern states. These testimonies speak decidedly and positively in regard to the subject of slavery. It was a system unbalanced and unjust. While we do not and will not dabble in politics, we will be colaborers with Jesus Christ. There are men who possess that spirit of bigotry for instance, the husband of Sister Douglas, who will manifest a rabid spirit, but we must not let these affect us. I tell you no complaint has been made but from Woodland. 3LtMs, Lt 36, 1880, par. 5

Why not cut out of your Bibles, when Christ refers to His work, “The Spirit of the Lord God is upon Me; because He hath anointed Me to preach good tidings unto the meek; he hath sent me to bind up the brokenhearted, to proclaim liberty to the captives, and the opening of the prison to them that are bound” (Isaiah 61:1)? 3LtMs, Lt 36, 1880, par. 6

We hope you will become a member here and join in the conversation on the forum….feel free to leave a post at the bottom of this article, too.